In order to get more accurate results, our advanced search has the following Google-type search functionality:

If you use '-' in front of a word, then that word will be absent in the search results.
Example: Either of drilling -diamond or -diamond drilling will return publications with 'drilling' in the title, but will exclude those that contain 'diamond drilling'.

If you use 'AND' (capitalized) between two words, then both of those words will be present in the search results.
Example: Page AND Griffin in the author(s)/editor(s)/compiler(s) field will return publications for which both Page and Griffin are in the list of authors, editors or compilers. The order is not significant, and there may be other authors listed for the publications. NOTE: Page Griffin or Griffin Page will return the same results as Page AND Griffin or Griffin AND Page.

If you use 'OR' (capitalized) between two words, then at least one of those words and possibly both will be present in the search results.
Example: Page OR Griffin in the author(s)/editor(s)/compiler(s) field will return publications that have either Griffin or Page or both in the list of authors, editors or compilers.

If you use 'NOT' before a word, then that word will be absent in the search results. NOT operates the same way as '-'
Example: Either of Page NOT Griffin or NOT Griffin Page in the author(s)/editor(s)/compiler(s) field will find publications with Page in the list of contributors, but will exclude those that contain Griffin in the list of authors, editors or compilers.

Placing double quotes around words will perform an exact phrase search. The search results will contain those words in that order.
Example: Searching for "Devonian Reef Complexes" in the title field will not return the title 'Devonian brachiopods from the reef complexes of the Canning Basin'.

'*' can be used as a wildcard within a word or at the end of a word. The '*' signifies any number of characters. It can be used where the spelling of a name or word is uncertain. Searches cannot start with a wildcard.
Example 1: Pal*ontology returns titles containing either palaeontology or paleontology.
Example 2: Geochemi* finds titles containing either geochemistry or geochemical.
NOTE: The 'OR' search can also be used when the spelling is in doubt — palaeontology OR paleontology.

More than one search term can be selected for each of these fields. Click in a field that displays 'Select some options' to display the list of choices, then select one choice at a time. Click in the field to display the list again for each search term.
Example: Select both Albany-Fraser Orogen and Bremer Basin in Geoprovinces. The resulting publications will have either Albany-Fraser Orogen or Bremer Basin or both in the Geoprovinces list on the details page.

Home » The geology of Shark Bay

The geology of Shark Bay 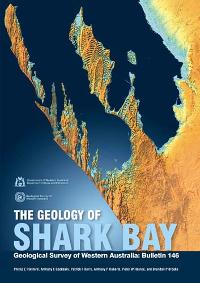